We think so. In free space UHF camera control will travel thousands of meters further than control operating in the 2.4 GHz band, that’s physics. But range isn’t the whole story and television is not made in free space. For studios, stadiums and arenas the working range of a wireless camera is less than a few hundred meters. And modern modem technology available for the 2.4 GHz band has many advantages over traditional UHF systems.

Licensed UHF camera control systems operate on a single, fixed frequency and are based on low data rate technology. Typically, UHF camera control channels are in the same licensed band as high power talk-back systems and production radios which on occasion have been known to cause interference. A licence costs money and needs to be booked in advance with the appropriate authorities. On large, televised events high demand can lead to problems with availability. At Broadcast Electronics we wanted to design a fully featured camera control system that could be used anywhere in the world without the need to apply for a licence. And above all, control had to be reliable. 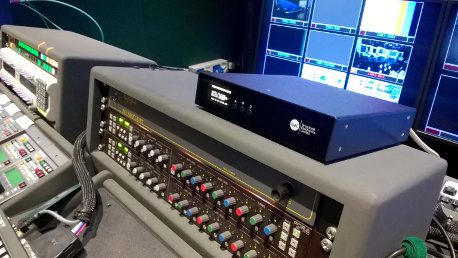 The Maxwell-z24 camera control system uses a Frequency Hopping Spread Spectrum (FHSS) modem operating in the licence exempt 2.4 GHz band. The technology features bidirectional data at a rate suitable for highly responsive, fully featured control of broadcast cameras and camcorders. It supports the use of the camera manufacturers’ own control panels. To the operator the system behaves in the same way as a cabled camera so there is no compromise in production quality.

The FHSS technology is the key to the reliable data connection. The modem is constantly hopping frequency channel to avoid those with worst performance. The 2.4 GHz license exempt band has hundreds of channels available so there is no problem from other technology in the band such as Wi-Fi or Bluetooth. It is also possible to operate multiple Maxwell-z24 systems in the same location as frequency hopping means they will automatically work around each other. Frequency hopping mitigates the effects of Multipath Interference, where reflections of a good signal from walls and other objects can have the effect of cancelling it out. The modem also supports Automatic Repeat reQuest (ARQ) technology, so lost data is re-sent. All of this technology sustains reliable control even on the limit of working range. 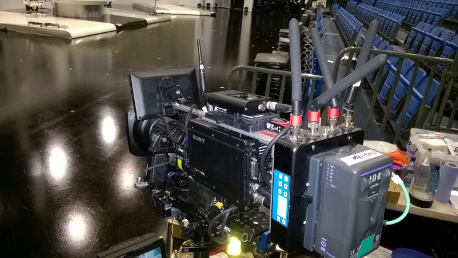 But how does this technology work in practice? We tested the Maxwell-z24 system at a large, televised event in central London, UK. The Maxwell-z24 Camera Interface was mounted on a Sony camera alongside a Link L1500 video transmitter operating in the 2 GHz spectrum. Video receive consisted of a Link L2174 receiver with two Co-Linear antennas and two Fan Beam antennas. All video receive antennas were filtered. It was found that the Maxwell-z24 system outperformed the video system by a considerable margin, achieving full coverage of the working area with no loss of control. A distance of over 250m non-line-of-site. Another trial was conducted at the IBC in Amsterdam. On a spectrum analyser it was clear to see the 2.4 GHz band was completely saturated with Wi-Fi traffic. The Maxwell-z24 system operated for the full duration of IBC without any loss of control.

The FHSS modem technology incorporated in the Maxwell-z24 system makes it a reliable choice for camera control and a viable alternative to traditional UHF systems. Performance is maintained in the presence of significant in-band interference and the system has been seen to outperform wireless video systems. The use of modern modem technology has made it possible to facilitate highly responsive bidirectional control. And the use of licence free spectrum has the benefit of zero running costs, worldwide. If you’re considering a new control system please contact us for a demonstration.